The "Akune Bontan Road Race" attracts runners from all over Japan to dash through the streets of Akune, which are dyed yellow by the ripening bontan trees. The event typically draws over 2,000 participants hailing from as far north as Saitama Prefecture to as far south as Kagoshima Prefecture's Makurazaki City. People of all ages participate, from 6-year-old children to 91-year-old seniors. The running course is overflowing with natural beauty, with the refreshing citrus scent of seasonal bontan fruits permeating the air as the runners are cheered on by spectators. This is a huge event for Akune that signals the arrival of winter. 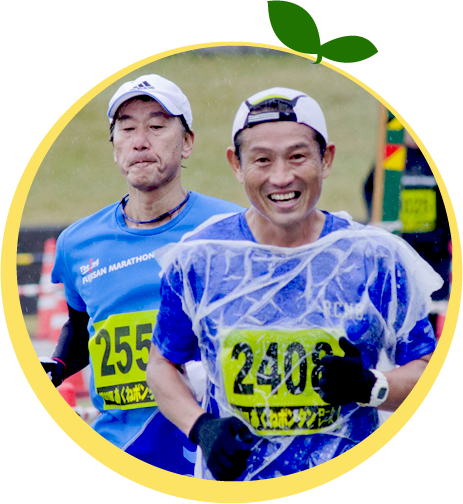 Ever since the first holding of the "Akune Bontan Road Race" in 1984, the event has enjoyed a rich 30-year history. On the cutting-edge of the health craze in recent years, the race was started as a way to help promote and maintain health and stamina for participants. The race's course has been adjusted a few times; for the first race through the fifth race, 3 courses were implemented: 3km, 5km, and 10km. Starting with the sixth race a half-marathon was implemented, and with the tenth race it became a full 3-hour marathon. Finally, since the thirteenth race there have been four courses: 3km, 5km, 10km, and half-marathon. The record for the competition's half marathon is 1:05:41. The highest number of participants recorded was 3,819 at the eighth race. Alongside the wonderful citrusy scent of bontans, one of the competition's highlights is being able to fully enjoy the seasonal treats. A "Local Specialty Fair" is held at the same time as the road race, a highly appealing event given Akune's reputation as a place for food.

The only qualification to join is that you are elementary-school age or older. Anyone who is confident in their health and stamina is free to participate. Every runner has their own goals, with some runners challenging the marathon record, and still others who just want to have fun and spend some time with their friends and family. Each runner can choose a course that matches their own goals and stamina and enjoy racing at their own pace. The races are divided up by sex and age, and medals are awarded for 1st through 3rd places in each event. All participants will receive a certificate and a bontan. There are other awards as well, such as awards for the oldest participants, and awards for people who traveled the furthest to get to the marathon.

A mountain of wonderful prizes awaits the runners who have finished their race and passed the goal line. As the runners arrive at the finish line, a lottery is held that has no losing tickets. The possible prizes include bontans, shochu, and other local specialties. If you're feeling chilled from the winter rain, a freshly-made bowl of kibinago soup will warm you up after your run. You'll be treated to dried sardines, steamed sweet potatoes, and pickled delicacies as well. The runners spend a moment talking amongst their friends and families as they savor the seasonal flavors of Akune. With everyone smiling as if the cold were nothing at all, the post-race atmosphere is full of accomplishment and camaraderie.

The most eye-catching thing at the race area is definitely the pyramid of bontans, towering over 3 feet tall. This pyramid generally contains about 1,000 bontan fruits, which the Akune region produces in high volumes. The locals are very familiar with the bontan pyramid as the monument of the competition. Naturally it's also a very popular spot for photographs as well. It's a well-established tradition for the runners to pose in front of the bontan pyramid as they finish up the race. After the competition's closing ceremony, the ~1,000 bontans are distributed to anyone who wants them. In no time at all, the bontan pyramid disappears.

Located in a valley, Akune City's Ozaki region is one of its bontan production areas. This region is home to around 8,000 bontan trees, which produce in excess of 50,000 bontans per year. In conjunction with the yearly road race, the Ozaki region hosts the "Ozaki Ikiiki Matsuri." The main event at this festival is harvesting the bontans from the heavily-laden branches. Numerous people come from outside the prefecture just to get a chance to try the bontan fruits picked fresh from the tree. When you enter the plantation you'll be greeted with the refreshing scent of bontans everywhere you go.

There is also a special site set up along the course where local farm specialties are sold and handmade onigiri are provided as snacks. Here, visitors and locals alike come together to warmly cheer the runners on as they dash by.

The Akune-shi Sogo Undo Koen Rikujo Kyogi-jo (Akune City Comprehensive Athletic Park Stadium) is the starting point. The half-marathon's course is full of ups and downs: it starts at 39m above sea level, then after about 4km it dips to 15m below sea level at its lowest point before going all the way up to 57m above sea level at the race turnaround point. Peaceful farms along the roadway form the backdrop for the race, with their ripening yellow bontans carrying sweet and citrusy scents to the runners. Every deep breath you take is full of the refreshing atmosphere born of Akune's lush nature. Enjoy racing at your own pace as the locals cheer you on warmly.