In March, the plums and other flowers begin blooming, marking the first signs of spring. During this time, the “ Akune City / Kyūshū Invitational High School Long-Distance Relay Race Competition” is held.
From within each prefecture in Kyūshū , the best athletes gather to fight it out!  Pitted against new teams, this race is a good chance to make predictions about the current season!
Each high school tries their best to set a new record time.

The Kyūshū Invitational High School Relay Race Competition has been held every year since 1991. It is a competition where teams from high schools all over Kyushu compete, with boys running a 42.195km race and girls running a 21.0975km race.
An exciting interschool relay race is held in Akune and uses the Akune Sports Grounds / Track and Field Stadium as its starting and end point. All the competing teams are reigning champions. The citizens of Akune City turn out in force to support the incredibly fast runners.
This relay race provides the opportunity for representative school teams (and reigning champs) to participate against new / unknown teams. The race is noteworthy in that it often serves to predict future events of the current season.
The athletes show the results of their training in this race, competing for time differences of just a few seconds. 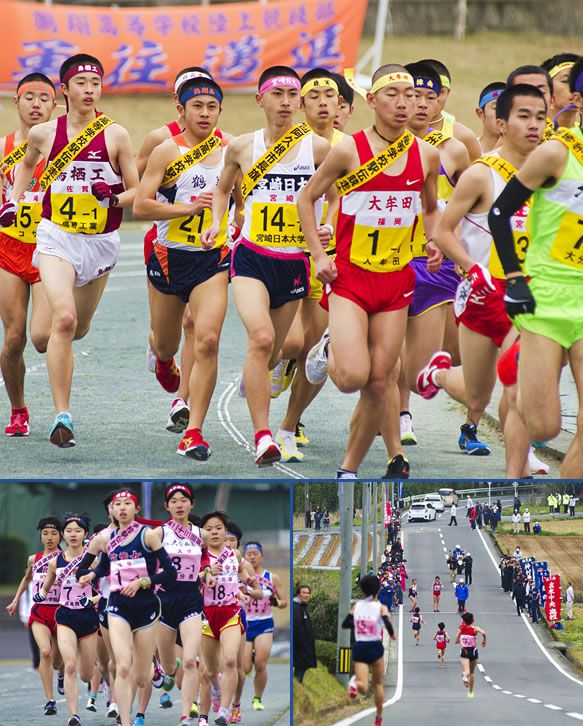 The day before the race, an official opening ceremony is held. All the athletes take a loud vocal pledge that reverberates throughout the stadium. Thus, the curtain is raised and the tournament begins. At the start signal, the athletes all take off running. The race gradually unfolds into a white-hot competition between the athletes, who bear the expectations of everyone on their shoulders. After the endurance-draining race, the athletes all collapse to the ground in exhaustion.

The voices of the spectators along the road cheer them on, and each athlete runs their hardest while aiming for the goal.
Although each athlete has a different facial expression when crossing the goal line, all of their faces shine with light.
After the race, the winning team receives a victory flag from the mayor of Akune and lots of admiration and applause from everyone at the event.