“I saw the waves and rocks of Hikaruze today; they seem to have a radiantly blue spirit”
This poem by Tekkan Yosano was written about a famous location in Akune known as “Hikaruze.”
A place where the reefs are said to emit light like a full moon, it has a mysterious aura about it that brings “healing.”

Within Akune there is a reef known as “Hikaruze.”
In the past, there was a mountain called Tobashira-san, which had a shrine on it called “Tobashira Myojin” dedicated to the god Susanoo-no-mikoto.
On the coast of this mountain there were two huge stones that glowed with mysterious light. Because of this, the people came to refer to these stones as the “divine lights” of Tobashira Myojin, and they started calling these rocks “gansho” (meaning ‘reef’.)
This light is one of the “Seven Wonders of Akune”, and it is said that anyone who has the luck to see this light will be blessed with happiness. 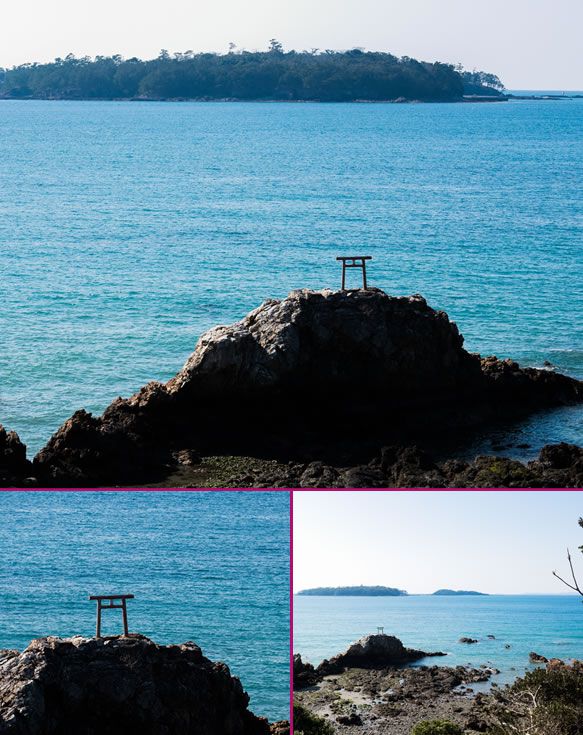 There are numerous places and things in Akune that have been called the "Seven Wonders of Akune" ever since long ago.

Past the townscape of Akune, along the coast is Tobashira Park.
From here you can look at Hikaruze and imprint its solemn appearance into your memory.
Beyond Hikaruze is Akune Oshima island, which has different appearances throughout the seasons that you can enjoy.
There are two shrines nearby which serve as some of the best power spots in the city: Tobashira Jinja and Gokoku Jinja.

There are 3 tanka inscriptions standing there.
One of them is a poem by the Meiji poet Hatta Tomonori.
This single-line poem by Hatta Tomonori is recorded in the book "Sangoku Meisho Zue." The poem itself is about the mysterious light that Hikaruze emits.

“ When I was asked why Hikaruze glows, I replied "Surely it is the work of the gods." (Hatta Tomonori)

To the side, there are tanka poems by Tekkan Yosano and his wife Akiko Yosano, standing as though lined up.

“I saw the waves and rocks of Hikaruze today; they seem to have a radiant blue spirit” (Tekkan Yosano)

"In the west you can see Akune’s Oshima; it is elegant like a young lady’s ornamental hairpiece.” (Akiko Yosano)

In the 4th year of the Showa Period (1929), Tekkan Yosano and his wife Akiko Yosano traveled throughout the various parts of Kagoshima Prefecture.
During December of that same year, he and his wife left behind these two poems in the publication "Kirishima-no-uta" (Poems of Kirishima)

To the sightseeing information details page 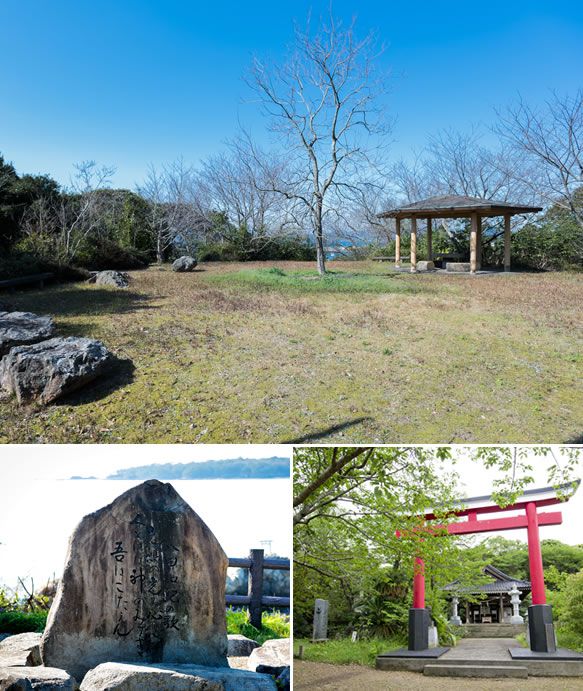