The Konpira Matsuri is commonly referred to as the “Sangatsu Toka Matsuri”, meaning March 10th Festival.
This festival was originally sponsored by the Kawaminami family, who were a family of highly influential shipowners in this region. The purpose of the festival is to pray for safe journeys for the ships.
A tradition that has been carried on since 1787, this festival gradually became an event for workers in the fishing industry to pray for safety while out on the ocean, and in modern times it is gaining popularity as an event for enjoying flowers in spring. 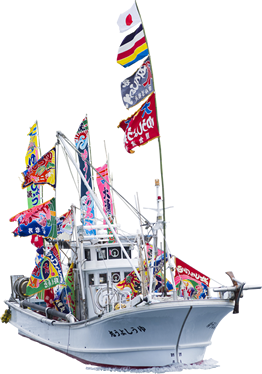 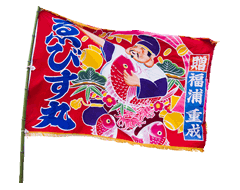 The “Sangatsu Toka Matsuri” is held on March 10th.
The most exciting attraction is the fleet parade, which uses boats boasting over 25 years of history.
To pray for safe journeys and abundant fish harvest, the Kitasatsuma Fishery Cooperative Kuronohama Branch Youth Group takes the boats for a round-trip all the way from Kuronohama Port to the Kuronoseto Ohashi Bridge and back again.


The highlight of the festival is the 15-boat fleet racing over the water, flying colorful fishing flags.
The sound of roaring engines fills the air, along with black smoke.
After the parade, there is a 'Rice Cake Throwing' event
at Kurunohama Port. People of all ages, from children to adults,   have great fun clamoring for rice cakes that are thrown from the boat decks.

During the era of domains, the Kawaminami Family was responsible for great contributions to the finances of the Ryukyu Domain. Their primary specialty was trading in Chinese goods, which were a valuable commodity.

Every time the Kawaminami Family would send out one of their ships, they would pray for its safety. However, during the year in which the domain ruler Shigehide enshrined Konpira on Oshima, he extended invitations to numerous domain officials and important village officials throughout the domain, resulting in a grand festival.
Ever since then, this day (3/10 according to the old Japanese calendar) came to be known as the Sangatsu Toka Matsuri. Every year, it is celebrated at Konpira Shrine on the island of Oshima in Akune, to pray for the safe voyages. 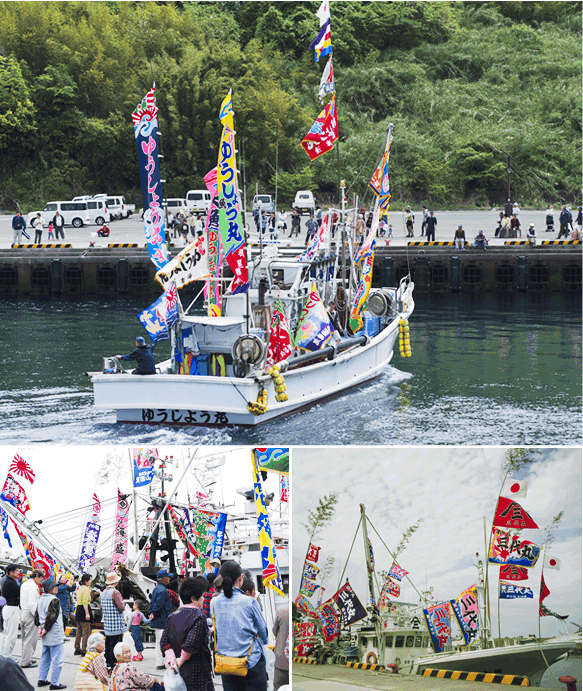 Long ago, if you added the number of individuals employed by the Kawaminami family as well as their families together, it numbered over 2,000 people. However, the Kawaminami family gradually fell into ruin over time.
On the other hand, the fishing industry expanded, and fishing in far-away locations began. Thus, the "Sangatsu Toka Matsuri" became a festival for workers in the fishing industry to pray for safety, and furthermore it also became a festival for flower-viewing along the coastline.

This flower viewing was formerly famous as the "Akune Sangatsu Toka", notable for its gorgeous bentos.
Those bento boxes were said to be brought to Akune from Ryukyu. They were luxurious bento boxes made with crimson Ryukyu lacquer, used exclusively to bring personal lunches to the festival. Today, many of these bento boxes still exist in the city of Akune.
It is commonly said that because of these Ryukyu bento boxes, the "Sangatsu Toka Matsuri" also has very deep ties to the Kawaminami Genbe family, the government merchants of the Ryukyu Domain's trade industry. 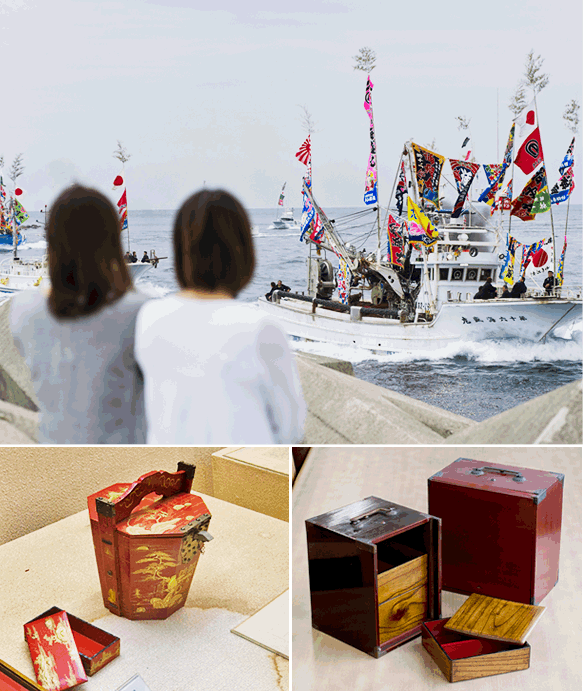